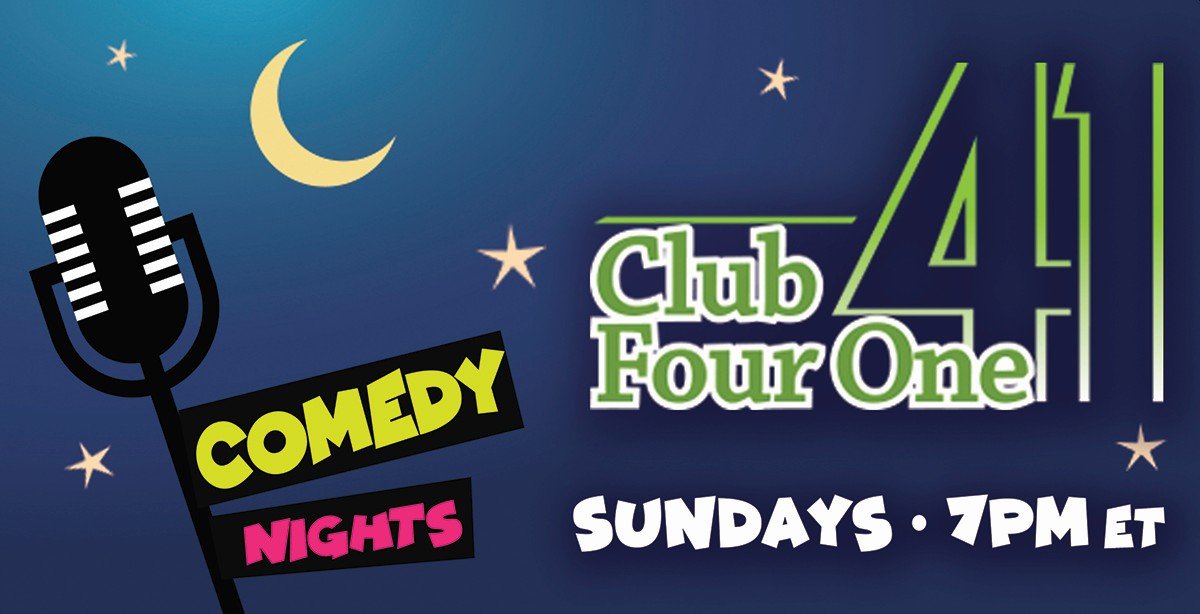 The return of cold weather is certainly no laughing matter, but the return of “Comedy Nights” to Club Four One is definitely something to laugh about!

Comedy Nights make their official return to the Island on Sunday, September 1 at 7 PM ET. Held in Club Four One, Comedy Nights feature a different nationally touring comedian from the Bonkerz Comedy Club each week. Check out our list of upcoming comedians for the month of September.

September 1, 2019 – Dwayne Gill as heard on the Bob & Tom Show & seen on ABC, with special guest A Marine, A Cop and A Comic! Dwayne Gill is a triple threat!
Feeling his job was way too serious for someone considered funny since birth; Dwayne found an outlet for his humor 1993. Dwayne’s topics range from current events, relationships, to the crazy situations he’s encountered as a police officer. As an actor, Dwayne has appeared in the ABC crime drama “Detroit 1-8-7” and made his big screen debut in the movie “Crave”. He has also been a guest on the nationally syndicated “Bob and Tom” Radio show. Dwayne has appeared at the Boston Comedy Festival, Best of the Midwest in Laughfest and was the Wildcard Winner in the Stand Up its Miller Time National Comedy Contest with Kevin Hart. So, if you have never met a cop with a sense of humor, then it’s obvious you
haven’t met Dwayne!
Watch a clip of Dwayne Gill.

September 8, 2019 – Billy Ray Bauer as heard on the Bob & Tom Show & Sirius XM radio
Billy Ray has been performing stand-up comedy across America for the last 25 years. From headlining at great comedy clubs to performing for large corporations, he’s established himself as a tried and true funny guy. From skewed descriptions of growing up in Detroit in the sixties, to the gory details of raising four boys in the new millennium, Billy Ray will leave you laughing and exhausted from his ordeal.
Watch a clip of Billy Ray Bauer.

September 15, 2019 – Tim the Dairy Farmer, as heard on Jeff & Larry’s Comedy Round up on Sirius/XM Radio and seen on Last Comic Standing, CMT, FOX, & Laugh USA and Sonya White as seen on CMTs Country Fried Chicks, NBCs Last Comic Standing, Star Search & Oxygens Girls Behaving Badly.
Tim the Dairy Farmer is definitely not a motivational speaker. Tim is a Florida dairy farmer and comedian. His experiences on and off the farm help him bring out the humor of everyday farm life. You don’t have to live on a farm to understand Tim. Most recently, Tim signed by famed comedian Larry the Cable Guy to produce Tim’s album “Farm Raised”. No matter what your background, Tim will have you doubled over from laughter with his laughs per minute style.
Watch a clip of Tim the Dairy Farmer.

Sonya serves her funny stand-up routine with northern flavor and a southern accent. Her observational comedy is enhanced by dead-on impersonations and appropriate sound effects. Her comedy is based on real-life experiences and her fond-but irreverent-interactions with friends, family and the world at large.
Watch a clip of Sonya White

September 22, 2019 – Kirk Bogos as seen in “The Avengers” & heard on Sirius/XM’s “Raw Dog Comedy” Channel, with Kevin Whelan.
Kirk grew up on the streets in South Philadelphia which is where the roots of his comedy come from. His comedy spin looks at the very simple things that happen to us all every day from a slightly cockeyed point of view. Kirk contends that it’s easy to be funny when you’ve survived the 60’s and 70’s, did all the drugs you were supposed to, been married 4 times, been fired by President Reagan as an Air Traffic Controller AND actually owns a copy of the record album, “Leonard Nemoy’s Greatest Hits.” All he needs is a microphone and a stage and a few people to laugh with him. Kirk has appeared in the Marvel blockbuster, “The Avengers” and you can hear him daily on XM/Sirius Satellite’s “Raw Dog Comedy” channel.
Watch a clip of Kirk Bogos.

September 29, 2019 – Nathan Timmel as heard on The Bob and Tom Show.
Nathan was the only child running around the playground shouting the “Seven Dirty Words You Can’t Say On Television.” Thus, began his comedy career. Since those auspicious beginnings, Nathan has: performed at comedy clubs across the country, recorded several comedy CD’s which receive regular airplay on both Sirius and XM satellite radio, and visited the nationally-syndicated Bob and Tom Show several times.
Watch a clip of Nathan Timmel.