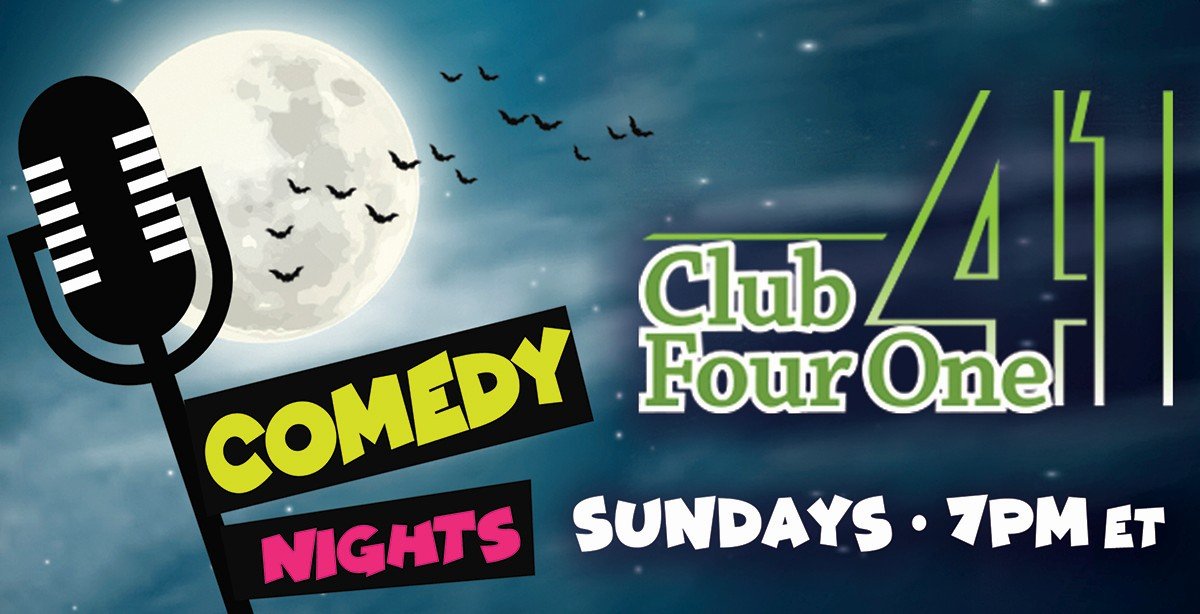 Laugh away the frights of October! Held in Club Four One, Comedy Nights feature a different nationally touring comedian from the Bonkerz Comedy Club each week. Check out our list of upcoming comedians for the month of October.
*All shows start at 7 PM ET. You must be 18 or older to enter Club Four One.

October 6, 2019 – Brian Green as seen on Comic View
With quick wit and improvisational skills, Brian’s timing is impeccable. Brian is a witty and animated humorist who delivers uniquely hilarious comedy. Much of his material deals with the differences and observations of today’s world through the eyes of a cynic. Brian is popular among fans of all ages. Brian has opened for celebrity comedians including Sinbad, Andrew Dice Clay, Billy Gardell, Drew Carey and Robin Williams.

October 13, 2019 – Tyler Boeh as seen on Laughs on FOX, with Kristoffer Olson
How do you go from being a nationally recognized vocal percussionist in a college acapella group to a nationally touring headlining comedian? Ask Tyler Boeh, a comedian whose comedy has been described as high-energy, intelligent, physical, and silly. His quick wit and award winning “beat-boxing” talent bring audiences to hysterical heights. Tyler started his stand-up career in his hometown of Portland, OR. After placing in the finals of multiple comedy competitions, Tyler made his way to Los Angeles. Within a year of his move to Hollywood he had established himself at the top comedy clubs, completed work on two television pilots, and Tyler’s debut comedy album, Carpool Companion, was chosen as LaughSpin Magazine’s album of the year in 2012. In 2015, Tyler held his own with Craig Fergusson on his new show Celebrity Name Game, was featured in numerous BuzzFeed videos, and appeared in 3 episodes of Laughs on FOX. Tyler recently released his Dry Bar Comedy special, Wait for It, which has already received over 25 million views online. Tyler continues to perform across the country at comedy clubs, colleges, casinos and theaters bringing his incredible brand of humor wherever he goes!
Watch a clip of Tyler Boeh

October 20, 2019 – Gene Renfroe as seen on ABC and NBC, with Bobby Hill
Gene retired from accounting after 20 years to pursue his dream as a stand-up comic. The accounting world thanked him, but more importantly so did the comedy world. Gene’s comedy is based on his days as Mr. Mom, his marriage of 19 years and his view of the world.
Watch a clip of Gene Renfroe

October 27, 2019 – Mike Merryfield as seen on The Next Big Star
Mike started his comedy career nearly a decade ago as a doorman at a local comedy club. Since making the leap from doorman to the stage Mike has not looked back. Mike brings his unique style and likeability to comedy clubs across America. His style is refreshingly new. His quick wit and adaptability make a comedian that everyone will enjoy. Once you’ve been exposed to Mike’s infectious style of comedy you will never be the same.
Watch a clip of Mike Merryfield