Some Bang For Your Buck

Home » Blog » Upper Peninsula » Some Bang For Your Buck 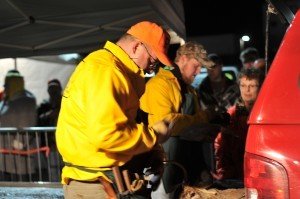 With temperatures averaging in the upper 40’s, the start of the 2013 Michigan Firearm Deer Season didn’t resonate much of a bang with local hunters. The warm temperatures in culmination with a lengthy winter (2012-2013) took its toll on the Upper Peninsula’s deer herd making the 2013 season a bit more challenging than those in recent past. However, the challenge wasn’t a deterrent for the 30 plus hunters who gathered in the parking lot of the Island Resort & Casino for the 16th Annual Deer Poll.
Sponsored by WYKX and the Island Resort & Casino, the 16th Annual Deer Poll provided those successful hunters with the opportunity to have their deer measured, weighed and aged by local DNR officials. The hunter bringing in the “Biggest Deer” of evening, would not only be awarded bragging rights, but would also receive $300 towards a shoulder mount for his/her prize deer.

The Hunt Is On
The hunt for the “Big Deer” officially began at 6:00 PM. Successful hunters caravanned through the parking lot until they were directed to the staging area by event staff. Upon their arrival in the staging area, successful hunters were given the opportunity to display their trophy deer to the over 100 spectators who braved the rain to attend this year’s festivities. In addition to the fanfare, participants were also greeted in the staging area by local celebrities/outdoor enthusiasts; Tim Kobasic (Host of UP Trails & Tales Radio) and Brian Whitens (Host of WLUC-TV6’s 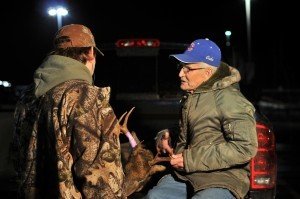 Discovering). Many of the evening’s participants were gracious enough to give interviews to both Tim and Brian. After eavesdropping (shhh..don’t tell) on several of the interviews, here are some of the more interesting things we learned regarding this year’s event:

Feeling sorry that you missed out on such a great event? Not to worry, highlights from this year’s event can be seen on WLUC TV6’s Discovery with Brain Whitens.

Getting Straight To The Point (Antler Points That Is)
The 16th Annual Deer Poll drew in over 30 trophy deer from around the Upper Peninsula, but in the end we could only have one winner! 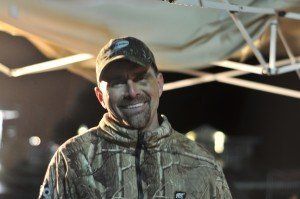 Phil Arnt of Escanaba, Michigan bagged a nine-point buck which weighed in at an estimated 170 pounds and was approximately 4.5 years of age when it was taken in the Rapid River area. For his trophy deer, Phil will receive $300 towards a shoulder mount and most importantly… bragging rights for the next year! If you didn’t make it to this year’s event, be sure to mark your calendar…. The Annual Deer Poll is respectively held on the 1st Sunday of opening week!