Two Thumbs Up – An Evening At The Tonys

Home » Blog » Entertainment » Two Thumbs Up – An Evening At The Tonys

Broadway Comes To The Island
The spirit of Broadway was 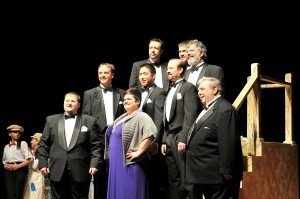 alive and well in the Island Showroom over the weekend when the Island Resort & Casino in collaboration with Players de Noc rolled out the red carpet for “An Evening at the Tonys”.
A Total Experience Indeed
Excited about the opportunity to bring a new experience to the Island Showroom, the management team here at the Island decided to make this event “A Total Experience” for ticket holders by offering (for purchase) ”An Evening at the Tonys Grand Buffet Dinner” in conjunction with the show. Ticket holders who attended the pre-show dinner were treated to our grand buffet which featured such items as:

Directly following the conclusion of dinner, guests received the celebrity treatment as they were escorted to the red carpet outside of the Island Showroom. To add to the “Hollywood-feel”  of the event, guests were greeted and photographed by our very own paparazzi who were stationed behind the ropes of the red carpet.

A Little Something For Everyone
Directed by Cori-Stupak-Vetter with Musical Direction by Travis DuBord, An Evening at the Tonys featured selections from some of Broadway’s most celebrated musicals. The seventy minute show featured songs from:

While the show contained a little something for everyone, some of the more memorable moments included Allison Williams & Chris Bonczyk’s rendition of “Seasons of Love” from the Musical Rent along with Cathy Wilson’s performance of “Little Girls” from the Musical Annie. Williams’ powerful vocals drew an eruption of applause from the audience while Wilson’s “spot-on” portrayal of Miss Hannigan had more than a few members of the audience chuckling.
The overall reaction to the production was incredible based upon the conversations overheard as guests exited the showroom.  With such an incredible response for this inaugural event, it leaves us hopeful to the idea of adding similar experiences to our lineup in the future.