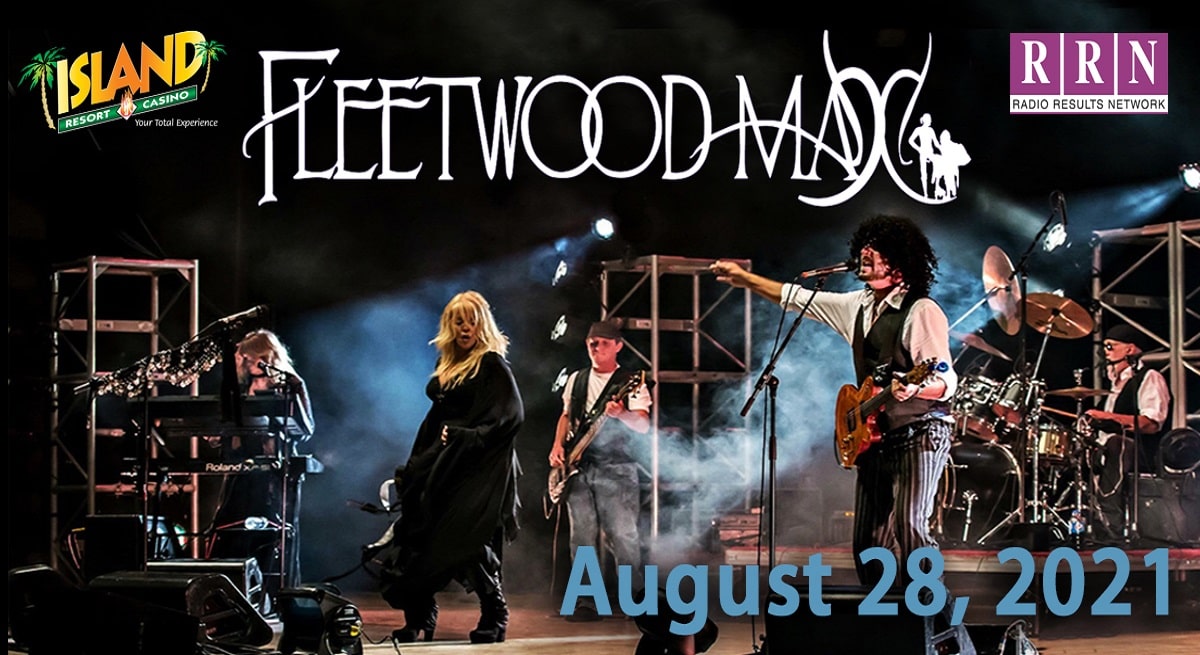 Have you heard the “Rumours”? They’re all true—Fleetwood Max: The Definitive Fleetwood Mac Tribute Band is set to take the Island Showroom stage on August 28th, 2021. Come experience the only authentic recreation of Stevie Nicks and Fleetwood Mac for one night only.

Fleetwood Max: A “Landslide” of Authentic Rock and Roll

Fleetwood Max is the country’s definitive Fleetwood Mac tribute band. Formed in 2007, the talented band continues to recreate the music and magic of incredible Stevie Nicks and Fleetwood Mac from the Rumours album to the band’s current setlist.

Fleetwood Max is led by Stevie Nicks look-alike and sound-alike, Sharon Epperson, who embodies Nicks’ voice and passion. As Epperson belts “Edge of Seventeen,” audience members are often transported to the concert halls of the 80s.

The band also includes Lindsey Buckingham look-a-like, David Epperson, who sings and shreds guitar to favorites such as “Go Your Own Way” and “Big Love.” Check out Fleetwood Max’s musical talent by listening to these tracks:

Fleetwood Max tours around the US playing concert halls, festivals and private events. Recently, the band has had several sold-out shows and events reaching up to 6,000 fans. At each show, Fleetwood Max delights the audience with classic songs from Fleetwood Mac’s first title album to newer albums such as “Don’t Stop.”

Fleetwood Mac, the legendary and Grammy award-winning rock and roll band, has a career that’s nothing short of incredible. Formed in 1967, the band produced widely popular hits such as “Landslide” and “Rhiannon.” Spitfire Stevie Nicks, one of rock and roll’s most notable artists, joined the band in 1975.

Fast forward to now and Fleetwood Mac continues to tour around the globe. In the past 50 years, the band has sold more than 100 million records worldwide and was inducted into the Rock and Roll Hall of Fame in 1998.

See Fleetwood Max for One Night Only at the Island Showroom

Don’t miss your chance to see Fleetwood Max live in concert at the Island Showroom. This show is scheduled for one night only. Grab your tickets today.