Food For Thought – What Goes Into Creating A New Menu 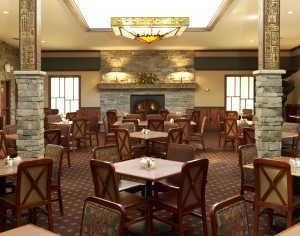 Most locals would agree that Michigan’s Upper Peninsula is home to some of the finest eateries in the state. From upscale restaurants to casual dining establishments, the possibilities for residents and visitors alike are seemingly endless. It is the combination of endless dining options and the level of culinary talent that supports these establishments that leaves little room for complacency.
It was a sense of growing complacency in the Firekeeper’s menu that led Executive Chef, Jay Fehl to launch the new Firekeeper’s menus in December of 2013. Post release in January of 2014, we briefly touched upon what guests could expect from the new menu in our “A Fresh Start to the New Year” post. Because the post generated a great deal of interest in the new menu, we wanted to follow up with a short post on what exactly went into creating the new Firekeeper’s menu.
The creation and launch of the new Firekeeper’s was truly a “labor of love” on the part of Executive Chef, Jay Fehl

and his team in the Firekeeper’s Kitchen. The initial process began in the spring of 2013 and started with Fehl penciling down ideas for the new menu. His goal with the new menu was to keep the venue’s offerings in line with guest demands, while placing a unique spin on each menu option giving it a distinctive flavor that could only be found at the Firekeeper’s Restaurant.
Once the menu ideas were in place, the arduous process of product selection began. With the new menu’s focus centering on the concept of quality, product selection would prove to be the most crucial aspect of the redesign process. Fehl had the challenge of finding products that were not only high quality but priced reasonably enough as not to drastically increase the price of the final product. With the menu options in place and the product selection process complete, recipes had to be created for kitchen staff to follow. Once the recipes had been created and the kitchen staff has had an opportunity to experiment with them, the next step was for staff to gain consistency in the ways in which the food is prepared, plated and served.
Once the kitchen staff has a handle on the consistency of each menu item, the wait staff underwent a series of trainings (which included a tasting event) to help familiarize themselves with the new menu so they could better assist our guests.  Once the wait staff trainings were complete and Chef Jay felt comfortable with the end product, the menu was released into the restaurant.
So the next time you’re dining in the Firekeeper’s Restaurant and you look at your menu, let this post give you some “food for thought” as you’ll have a greater understanding of just what it took to create the menu that you are holding in your hands.