It’s Music To Your Ears! 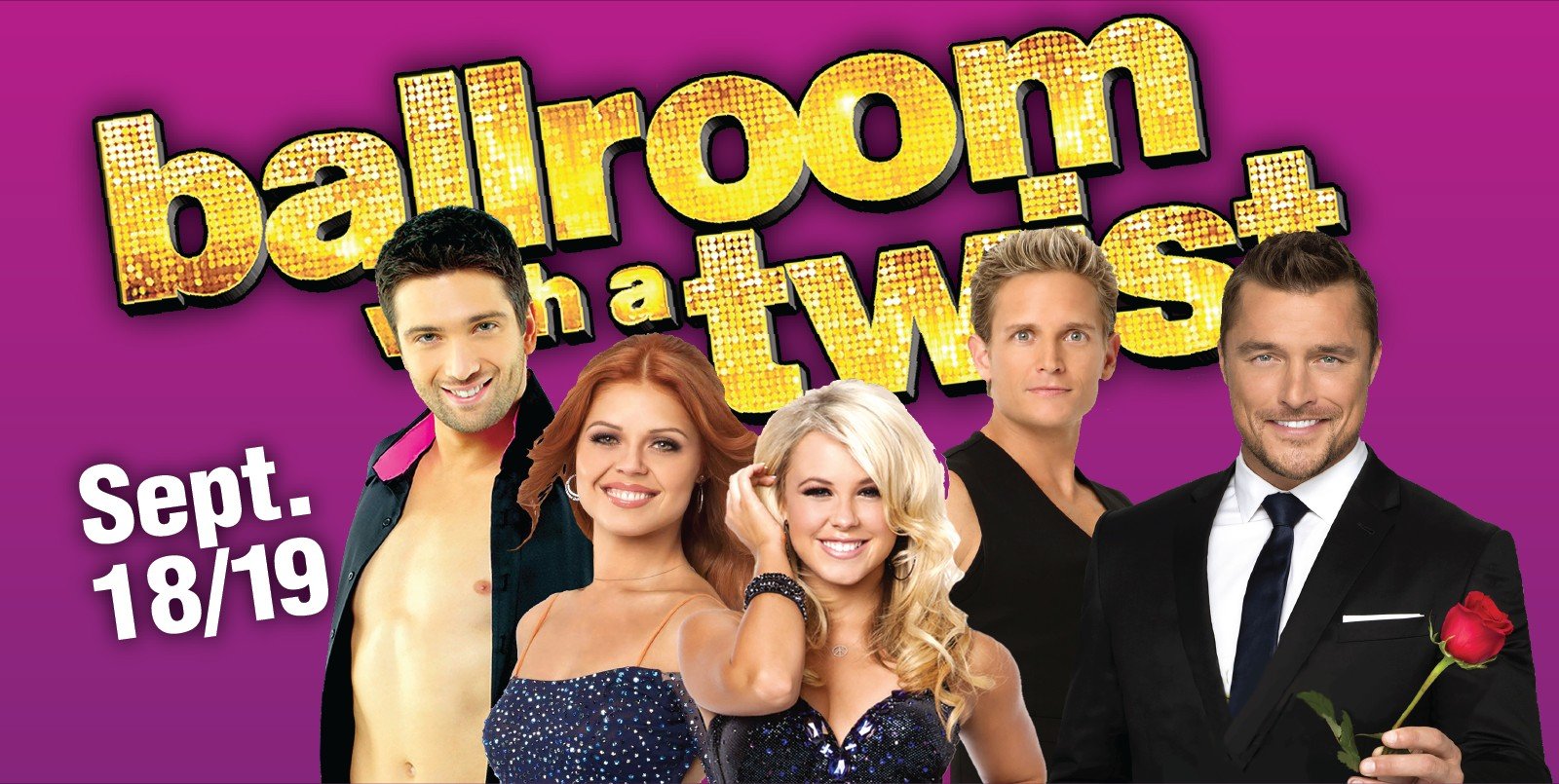 Our Headline Entertainment Lineup will be music to your ears!

Ballroom With a Twist
September 18th & 19th
Hot, Hit Stage show starring Chris Soules (The Bachelor), Dancing With The Stars Pros, So You Think You Can Dance and American Idol finalists. Don’t miss your chance to receive a rose from none other than the Chris himself! If that isn’t enough… One lucky lady will be selected to share a special dance with Chris himself!!!

Wayne Brady
October 2nd & 3rd
For Wayne Brady, music and comedy has seemed to be at the center of his wildly successful and diverse career. Wayne has been entertaining audiences with his singing, acting and unmatched improvisational skills for well over a decade.  This diversity has led to a career that goes beyond the term “triple threat.”
Brady began his career in Orlando working at theme parks as well as performing in several local theatre shows.  This is where his love for improvisation was sparked as he was a member of the Orlando improv comedy theater, SAK Comedy Lab.
In 1998, his career took off with “Whose Line is it Anyway?” for which he won a 2003 Emmy Award for Outstanding Individual Performance in a Variety, Musical or Comedy Series.  The show returns this year with all new episodes.  Wayne went on to host his own syndicated talk show “The Wayne Brady Show” for two seasons.  He was honored with two Emmys for Outstanding Talk Show Host and the show also won Outstanding Talk Show.
In 2005, Brady returned to his first love, musical theater, and starred in the Broadway production of “Chicago,” playing the role of lawyer Billy Flynn.  He made a big splash in Las Vegas with his hit stage show “Makin’ It Up.”  The show was met with critical acclaim and has been heralded as “pure genius” and “hysterically funny.”  Brady has taken the show around the world playing in such countries as South Africa, Australia, New Zealand and India.  Wayne again returned to the live theater in 2010 when he joined the all-star cast in the Neil Patrick Harris directed “Rent” at the historic Hollywood Bowl.
Conquering stage and television was not enough for this unique talent.  He was nominated for a Grammy in 2008 for his Best Traditional R&B Vocal Performance for his single “A Change Is Gonna Come,” off debut album “A Long Time Coming.”   In addition, Wayne released a children’s album entitled “Radio Wayne” which took the top spot on iTunes and Amazon kids charts.
On the big screen, Brady has been featured in several films including:  “Crossover,” “Roll Bounce,” for Fox Searchlight as well as the animated film “Foodfight.”
Being an award winning host, it is no wonder why he has been tapped to host several high-profile shows including the NAACP Awards, BET Honors as well as guest hosting The Late Late Show for a week earlier this year.  His hosting role on the iconic “Let’s Make A Deal” has been garnered with several Emmy nominations including Wayne for hosting.
Wayne is currently working on new music and will return to the hit BET series “The Real Husbands of Hollywood” which airs a new season beginning this summer.

Trace Adkins
October 16th & 17th
Trace Adkins’ trademark baritone has powered countless hits to the top of the charts and turned albums into Platinum plaques, selling over 10 million albums, cumulatively. The Grammy-nominated member of the Grand Ole Opry is a television personality, actor, author, spokesman for the Wounded Warrior Program, the American Red Cross and has performed seven USO Tours.
In his 2007 autobiography, A Personal Stand: Observations and Opinions from a Freethinking Roughneck, the 6’6″ oil-rigger recounted his rise to fame, brushes with death and battles with personal demons. He also explains just how the world’s biggest alpha-male handles fatherhood with five daughters. In 2008, Trace’s integrity and wry humor served him well as a finalist on NBC’s The Celebrity Apprentice and prepared him for his return – on behalf of the American Red Cross – to NBC’s All-Star Celebrity Apprentice.
Trace has played a tough as nails biker in the The Lincoln Lawyer, developed and hosted GAC’s “Great American Heroes”, and has hosted the American Country Awards on FOX for four consecutive years.
In late October, Trace released his first Christmas album entitled, THE KING’S GIFT, a unique collection of Celtic carols and traditional holiday favorites. The album boasts an impressive group of musicians, including world-renowned Irish ensemble The Chieftains, Scottish vocalist Alyth McCormick, award winning family group The Issacs, Kevin Costner and daughter Lily Costner, and rock drummer Kenny Aronoff.
Many have been intrigued by Trace’s Celtic inspiration on THE KING’S GIFT. Trace explains, “[Celtic] music just strikes a primal chord in me. I’ve enjoyed listening to it and always hoped to do something with it.” Not only has Trace recorded a one-of-a-kind album, he has developed a special holiday tour, The Christmas Show as well. The 18-city tour is designed as a reverent theatrical and musical production that delves into the holiday traditions and lush arrangements that create THE KING’S GIFT. Trace hopes the tour will become a holiday tradition in which his fans and their families share the joy of the season with him for many years to come.

Steve Earle & The Dukes
November 20th & 21st
A protégé of legendary songwriters Townes Van Zandt and Guy Clark, Earle quickly became a master storyteller in his own right, with his songs being recorded by Johnny Cash, Willie Nelson, Emmylou Harris, Waylon Jennings, Travis Tritt, The Pretenders, Joan Baez and countless others.
1986 saw the release of his debut record, Guitar Town, which shot to number one on the country charts and immediately established the term “New Country.” What followed was an extremely exciting and varied array of releases including the biting hard rock of Copperhead Road (1988), the minimalist beauty of Train A Comin’ (1995), the politically charged masterpiece, Jerusalem (2002) and the Grammy Award Winning albums The Revolution Starts…Now (2004), Washington Square Serenade (2007) and Townes (2009). I’ll Never Get Out Of This World Alive (2011) is Steve Earle’s 14th Studio Album and shares the same name with his 2011 debut novel. Of the novel, Patti Smith stated, “Steve Earle brings to his prose the same authenticity, poetic spirit and cinematic energy he projects in his music. I’ll Never Get Out Of This World Alive is like a dream you can’t shake, offering beauty and remorse, redemption in spades.”

Michael McDonald – This Christmas, An Evening of Holidays & Hits
December 11th & 12th
A prominent part in the soundtrack to our times, Michael McDonald, as an artist and songwriter, has been awarded an impressive five Grammys®. However, by maintaining a low-key profile, the contrast of Michael McDonald as a person and as a musician is astounding. Though comfortable onstage, he has never been a flashy entertainer, nor has he been distracted by passing trends. Instead, McDonald has triumphed through music alone, with a remarkable voice and a body of well-crafted songs. Few have made such an impact with so much substance and so little hoopla.
Known equally for his benevolence, as his musical prowess and successes, Michael McDonald has lent his talents and energies to a long, varied list of charitable causes throughout the first three decades of his career and he has contributed an overwhelming amount to numerous benevolent events and enterprises. Michael’s recent appearances have included a tsunami relief concert sponsored by The Wave in Los Angeles; TJ Martell’s Stevie Wonder tribute, NARAS/MusiCares’ tribute to Brian Wilson in 2005 and again in the 2007 tribute to Don Henley; Morehouse College’s tribute to Ray Charles, a fundraiser for Stax Museum and shows for The Little Sisters of the Poor in San Pedro, CA, and the Sisters of Mercy, in Oakland, CA, among others. Michael also participated in the 7UP Grammy Signature Schools Program and painted a Gibson Les Paul guitar for a NARAS/MusiCares auction. McDonald was recently honored at the WHY-Chapin awards dinner with the prestigious ASCAP Harry Chapin Humanitarian Award for both his musical career and his vast charitable endeavors. McDonald continues his fundraising efforts actively working with WHY’s – Artists Against Hunger & Poverty program.
Michael’s matchless and prolific consistency through more than 25 years of recording and performing was celebrated in August 2005 by Warner Brothers, who released Michael McDonald: The Ultimate Collection, highlighting the wide breadth of his career from his days with The Doobie Brothers to his solo hits, to his version of the Motown favorite Ain’t No Mountain High Enough.
Michael recorded a 2005 holiday CD, Through the Many Winters, A Christmas Album, that was recorded specifically for Hallmark Cards and sold exclusively through Hallmark Gold Crown stores. This collection of traditional and original holiday songs was certified gold within two weeks of the album’s release.
With a career that has seen innumerable chart successes and sales feats and as an artist who has maintained consistent popularity and earned numerous accolades in both personal and professional arenas, McDonald remains the artist’s artist and an enduring presence in popular music.