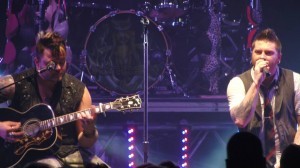 asino on Facebook or Twitter, then we’re sure you heard about our “Win a Meet & Greet with Hinder” promotion that was launched through our Facebook page back in September. On the other hand, If you’re new to our social media sites… then we invite you to take a moment to brush up on the history of our “Win a Meet & Greet with Hinder Promotion” through our Official Facebook Page (if you haven’t done so already, be sure to like our page while you’re there).
Hindered or Helped… The Judges Decide
The promotion itself, received a tremendous response! Over 100 submissions were received in the one week time span that the promotion ran. On September 26th the three submissions that received the most “likes” from our fans, were presented to a panel of 10 judges for voting (the names were removed from the submissions to keep the contest fair). After a great deal of deliberation, a poem submitted from Wisconsin resident, Jay Jameson was selected as the winning entry!
Fall is upon us,
it’s almost winter,
so we’re headed to the Island,
to see the band “Hinder”.
For the last few years,
we been coming to your shows,
to have the greatest time,
that only the Island knows!!
My friends and I,
are loyal to your place,
so please pick me,
to meet “Hinder” face to face.
This would be so awesome,
and I’m not talking smack!!,
cause the good times at the Island,
keeps us coming back…
For his winning submission, Jay was given to complimentary tickets to the October 4th performance of Hinder in the Island Showroom. In addition, Jay and his wife were given backstage access prior to the show where he was given the opportunity to have a short meet and greet with the members of the band. 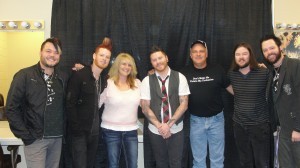 We followed up with Jay earlier this week to get his impressions of not only the concert but his meet and greet experience as well. Jay stated that he really enjoyed the concert despite the fact the Hinder frontman Austin Winkler was absent from the performance. Jay stated, Jared Weeks from Saving Abel has been filling in for Winkler on and off since Winkler requested a temporary leave of absence from the band earlier this summer. Jay especially enjoyed Jared’s collaboration with Hinder (Jay is also a fan of Saving Abel) as the group not only covered Hinder’s extensive set list, but also covered some material from Saving Abel as well!
In regards to the meet and greet with the band, Jay mentioned how accommodating the band members were to him and his wife. Not only did the band pose for a few group shots, but they also took the time to pose for individual photos as well!
Final Thoughts….
With such an overwhelming response to this promotion, we certainly hope to do something similar to this in the future! To make sure you’re a part of the action the next time around, please be sure to stay connected with us.
Facebook: www.facebook.com/islandresortandcasino
Twitter: www.twitter.com/IslandResortMI
Google +: https://plus.google.com/u/0/b/114173860409625514470/114173860409625514470/posts
Pinterest: http://www.pinterest.com/islandresortmi/
As we wrap up this post, special thanks goes out to Jay Jameson for so graciously providing us with an interview and photos from his experience at the Island. We’ve taken some of Jay’s photos and created a new board on our Pinterest page entitled “Your Total Experience – A Facebook Fan’s Perspective”.  We hope to be adding more photos to it in the near future!