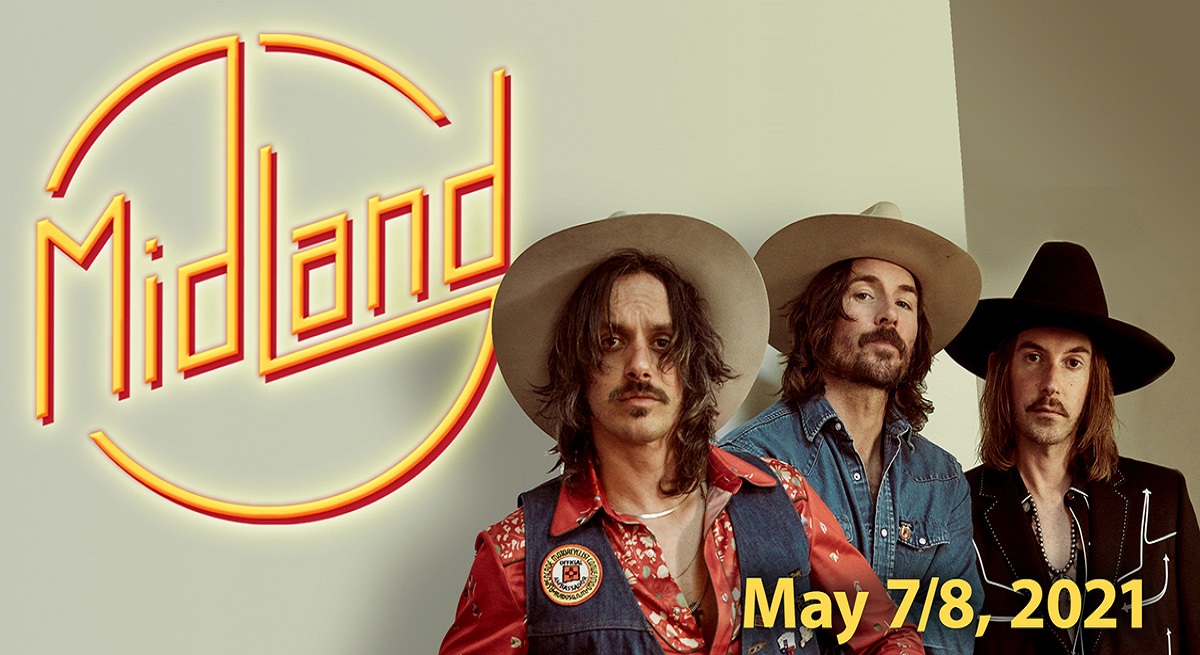 Country music purists and new fans alike have embraced Midland as one of the best new bands in the genre. Known for their breakout hit “Drinkin’ Problem,” these Texas tunesmiths have garnered a big following in a short time. You can see why on May 7th and 8th, 2021 at the Island Showroom.

From Humble Drippings to Award-Winning Sensation

Midland began down south in the town of Dripping Springs, Texas. Front man Mark Wystrach grew up around music with his parents the owners of a honky-tonk venue. He met lead guitarist/vocalist Jess Carson and bass player/vocalist Cameron Duddy in 2013 at Duddy’s wedding in Jackson Hole, WY. After playing music together on the porch of Carson’s cabin, the trio knew they had something special.

Taking their name from the Dwight Yoakum tune “Fair to Midland,” the group was a nod to the music that inspired them from the start. Midland became official in 2016 when they signed to Big Machine Records and released their self-titled EP. Their first single, “Drinkin’ Problem,” charted on the Billboard Hot Country charts and they never looked back.

The group released their debut LP, “On the Rocks,” in 2017. The album reached #2 on the Billboard Top Country Album Sales chart with the re-release of “Drinkin’ Problem” and the singles “Make a Little” and “Burn Out”.

In 2018, they were nominated for Grammy Awards for Best Country Song and Best Country Group/Duo. At the ACMs that same year, Midland won Best New Vocal Group or Duo.

They followed up their success in 2019 with their second LP, “Let it Roll”, which made it to #1 on the US Country charts. It featured the singles “Mr. Lonely” and “Cheatin’ Songs”.

Rolling Stone magazine describes Midland as “a mix of George Straight, Urban Cowboy and 70s yacht rock.” Billboard magazine compared their sound to “the rich California harmonies that made The Eagles legendary.”

There’s no doubt that Midland tips their Stetsons to the great country music artists of the 70s and early 80s that preceded them. The band themselves acknowledge that songs like “Drinkin’ Problem” come from that era when artists tackled heavier subject matter with a tongue in cheek attitude.

At its heart, Midland is a group of three guys who love to play. Come see for yourself why they’ve received praise from Variety, NPR, and Entertainment Weekly and why they were nominated for the 2020 ACM Award for Best Group of the Year.

While you’re waiting for their debut at The Island, you can start “Gettin’ the Feeling” with some of these favorite tunes:

Get Ready for the Electric Rodeo

Don’t miss your chance to see one of country music’s most talented and exciting acts. We managed to lasso them for two nights this May. The box office is standing by.