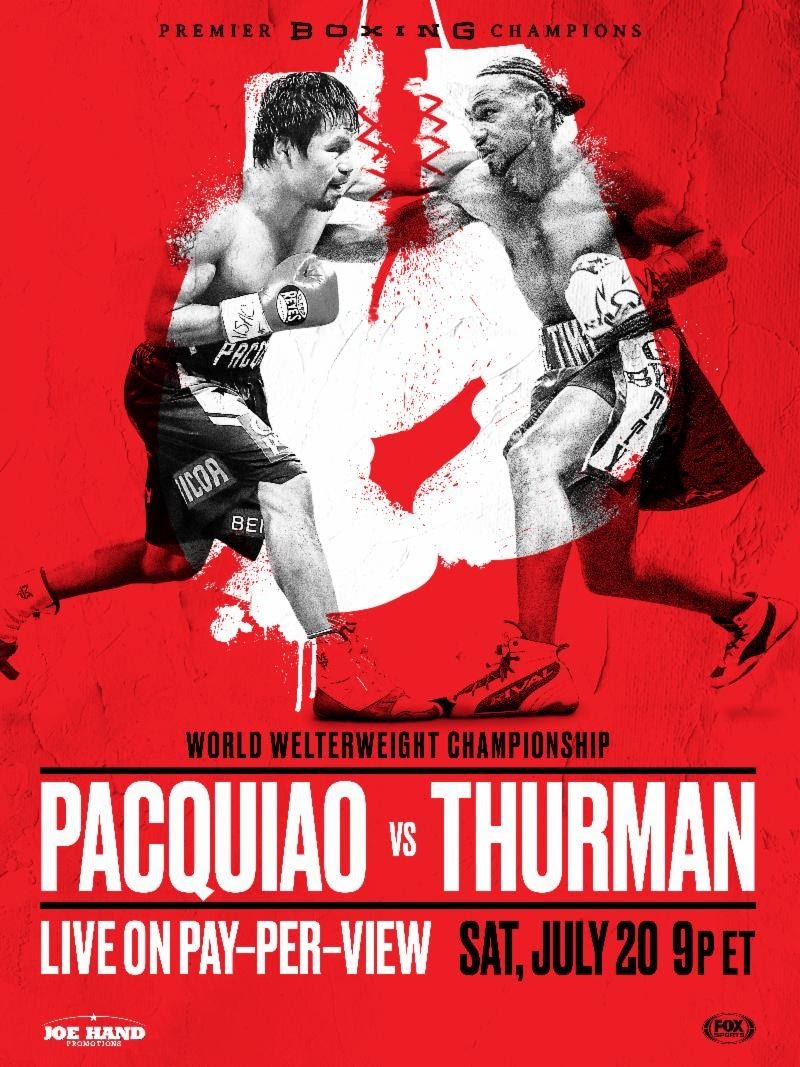 Welcome to your total sports headquarters! Join the Championship Boxing watch party at T. McC’s Sports Bar on July 20th, 2019 to witness the ultimate fight night go down at the MGM Grand Garden Arena in Las Vegas! Prelim fights will be shown on FOX beginning at 7 p.m. ET and the main event following at 9 p.m. ET.

Boxing’s only eight-division world champion, Philippine Senator and regular WBA Welterweight Champion Manny “Pac Man” Pacquiao takes on undefeated Super WBA Welterweight World Championship Keith “One Time” Thurman in a powerhouse 147-pound showdown live on Fox Sports Pay-Per-View. But you can forget about paying for that when you join our watch party at T. McC’s! Look out for drink specials and enjoy your night!

A three-time Fighter of the Year and the Boxing Writers Association of America’s reigning Fighter of the Decade, Pacquiao (60-7-2, 39 KOs), who hails from Sarangani Province in the Philippines, is the only sitting Congressman and Senator to win a world title. After serving two terms as Congressman, Pacquiao was elected to a Philippine Senate seat in May 2016, capturing over 16 million votes nationally. Pacquiao’s boxing resume features victories over at least seven current and future Hall of Famers. In his last match on January 19, Pacquiao put on a vintage performance against four-division champion Adrien Broner, scoring a 12-round unanimous decision in the 70th match of his illustrious career. It was his first time fighting in the U.S. in two years.

“All my life I have confronted challenges—in life, in politics, and inside the ring,” said Pacquiao. “Keith Thurman is the type of challenge I crave as a fighter. He is the biggest and best test. That is why I want to fight him. We are going to give boxing fans an exciting fight and a great night.”

The 30-year-old Thurman (29-0, 22 KOs) is the longest reigning welterweight champion in boxing, having collected his WBA title with a stoppage victory over Diego Chaves in 2013. He has successfully defended that title eight times and became a unified welterweight champion when he defeated Danny Garcia by split decision to win the WBC title. Plagued by a litany of injuries, including bone chips in his right elbow that had to be surgically removed, Thurman was out of action for nearly two years before getting back into the ring with a hard fought victory against Josesito Lopez in January 2019 on FOX.

Having taken up the sport when he was in grade school, the Clearwater, Florida native blossomed under the tutelage of his first trainer, Ben Getty, to become an outstanding amateur. Though Getty has passed away, Thurman still carries those boxing and life lessons with him whenever he steps into the ring with his current longtime trainer Dan Birmingham. His power punching earned him the nickname “One Time.’‘

“It’s going to be an honor to be in the ring with Manny Pacquiao. It’s going to be fun to go back to MGM Grand in my first pay-per-view with FOX Sports. I believe that Ben Getty would be very proud of what I’ve been able to accomplish. He said I’d be able to dominate the welterweight division and be a multi-million-dollar fighter and a star in the sport. Manny Pacquiao is beatable. He’s been beaten before in his career. He’s a fan favorite and a legend. You have to be respectful of his power. But I believe my movement, athleticism and ring knowledge will be able to present him something he’s not seen in all his years of boxing.”