For the past 24 hours, crews have been working around the clock with the goal of transforming the stage in the Island Showroom into a skating rink for this weekend’s performances of Christmas on Ice.
The transformation began yesterday morning (December 11th) at around 8:00 AM when crews began to assemble the 36×45 foot frame that would serve as the foundation for the rink. Once the frame was in place, crews lined the inside of the frame with a large plastic tarp to protect the stage from any type of moisture/water seepage that may occur during the freezing/refrigeration process.
A Bump In The Road Ice 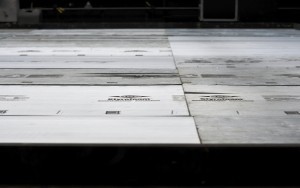 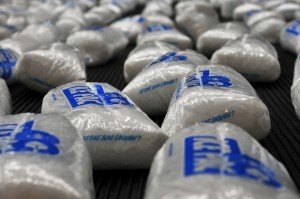 urned on the stage lights to help expedite the thawing process. Once the insulation sheets regained their flexibility, crews were then able to lay the insulation sheets on top of the tarp in preparation for the cooling mat and the ice itself.
Back On Track
With the frozen insulation problem solved, things were back on track! The cooling mat was laid down without incidence and crews were actually able to take a small break before the ice truck arrived.
Ice, Ice, Baby
At 2:00 PM, the ice truck arrived and crews began unloading some 900 bags of crushed ice onto the stage. Crews worked diligently and had all 8,600 pounds of ice unloaded and in place within a forty-five 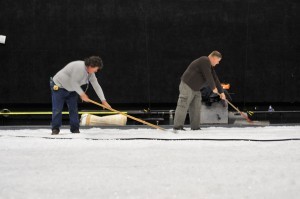 The indoor ice rink in itself is spectacular not to mention what the actual performance holds in store for our showroom guests! We highly recommend that if you don’t have tickets for this weekend’s performances of Christmas On Ice that you get them before its too late! Shows are scheduled for Friday & Saturday at 8:00 PM with a matinee performance on Sunday at 3:00 PM.