The Soups On! The 19th Annual Soup'r Chili Challenge

OFF OF THE ISLAND…

As a community service oriented enterprise, we take great pride in our participation in the many area events that take place “Off the Island”. On Tuesday, September 10th, the United Way of Delta County held its 19th Annual Soup’r Chili Challenge at the Upper Peninsula State Fair Grounds. Marking the kickoff of the United Way’s annual fundraising campaign, the Soup’r Chili Challenge is a community celebration designed to bring awareness of the upcoming campaign to the local area.
SOUPS ON! 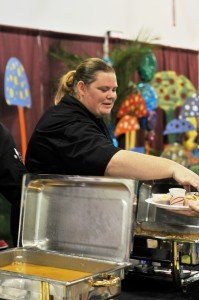 Over a dozen restaurants, businesses and organizations participated in this year’s event, each vying for the coveted “People’s Choice”/”Judge’s Choice” awards in their respective division (restaurant/non-restaurant). Chefs had two hours to prepare eight to ten gallons of their soups or chilies, which was then served to event attendees who voted for their favorites. Our entries for this year’s event were as follows:
Soups

In addition to preparing the soups and chilies, event participants were asked to decorate their booths according to the “story time” theme of this year’s event. In a complete coincidence, our booth was themed after the popular children’s book “Charlie & the Chocolate Factory” (pay close attention to our booth’s decorations; you’ll see them again in the photos for next week’s blog).
THE VERDICT IS IN!
We are proud to announce that it was a clean sweep for us in the “Judges Choice” award as our very own Coral Reef Grille won “Judges Choice” for their beef dumpling soup, while our 5 Bridges Pub won “Judges Choice” for their beer cheese chili. The following is a complete list of winners from the 19th Annual Soup’r Chili Challenge:
Judges’ Choice – Soup – Restaurant :
Coral Reef Grille – Beef Dumpling 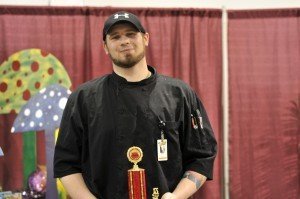 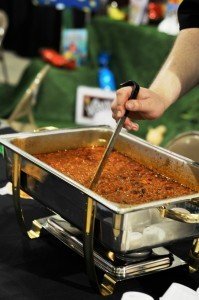 First and foremost, we would like to thank the Firefighters from the Brampton and Ford River Township volunteer fire departments who served as guest judges for this year’s event and voted our soup and chili as they favorites. Secondly, we would like to thank the community at large who attended this year’s event not only to show their support for those businesses and organizations participating in the challenge, but to show their support for the United Way of Delta County and the agencies that they support. Our final thanks goes out to our amazing Food & Beverage Department who worked tirelessly to prepare the 48 gallons of soup and chili that was served to the community during this event!

ADDITIONAL RESOURCES:
For news articles and photos from the 19th Annual Soup’r Chili Challenge, please click on the links below: