Ticket Tuesdays Return to the Island in April!

They’re Back…
The Island Resort & Casino is excited to announce that “Ticket Tuesdays” will be returning to our Twitter Page during the month of April! Each Tuesday during the month of April, the Island will be giving away 3 certificates which can be redeemed for two tickets ($80 limit) to any one performance in the Island Showroom.
Just to keep you on your feet, we’ve decided to add a “little twist” to this month’s contest! Each Thursday prior to our “Ticket Tuesday” the Island will upload a few of our past headline entertainment posters to our Instagram, Facebook, Twitter & Pinterest pages in recognition of “Throw Back Thursday” These posters will hold clues for the answers to the questions that will be asked during “Ticket Tuesdays”.
On April 7th, 14th, 21st, & 28th between 12:00 PM and 12:30 PM Eastern Time, the Island will be posting a question to their Twitter Page that will be related to one of the headline entertainment images that was posted the Thursday prior. The first person to reply to the tweet with the correct answer, will win a certificate for two tickets to any one performance in the showroom.
For Example: 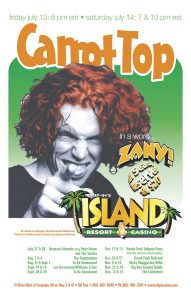 On Thursday, April 2nd, a headline entertainment image similar to the one above will be posted to the Island Resort & Casino’s social media pages.
On April 7th, the Island will make an initial post to the effect of
“The first person to reply to the next tweet with the correct answer will win a certificate for 2 tickets #islandtuesday”
Once this initial post had been made, it will be followed up with a question related to the headline entertainment image posted on our social media pages back on April 2nd.
“How much were reserved seats for Carrot Top’s July performance”
The first person to reply with the correct answer ($20.00) will win the certificate good for 2 tickets to any one performance in the Island Showroom.
Participants of “Ticket Tuesdays” must be at least 18 years of age or older and may only win one pair of tickets during the month. Winners will be announced on Twitter and will be messaged with instructions on how to claim their tickets.
We’ll see you on Twitter in April!!!