How To Play Let It Ride

Learn How to Play Let It Ride at Island Resort & Casino

Let It Ride uses a standard 52-card deck; it is a variation on casino Poker. The object of the game is to win on all the bets on the table.

You play with five cards but two of your five are “community” cards. Community cards are cards that everyone at the table can use as part of their five-card hand. In this game, the dealer deals the community cards face down and players have two opportunities to withdraw one-third of their initial three-part bet.

You are playing only for yourself and not against the house or the dealer. The dealer does not receive a hand in this game. If you don’t like your cards, you have two chances to decrease your bet and minimize your loss. The way to win is to hold a pair of Tens or better in your five-card hand.

How to Play Let it Ride

Each player places three equal bets on the table where indicated, usually by the symbols 1, 2 and $. At the appropriate time in the game, you can signal to withdraw your bets placed on the 1 or the 2. You can’t withdraw the third bet, placed on the $ symbol.

You can also make an optional, Three Card Bonus side-bet in addition to your standard, Let It Ride bet.

To start playing, the dealer starts from the left and deals three cards to each player. The dealer then places two community cards face-down on the table. Players may not look at each other’s cards until the game is over.

After looking at your three cards, you can ask the dealer to return your first bet back to you or you can “Let It Ride.” The table then moves on to the second round of play where the dealer will turn one of the community cards face-up.

All winning hands receive payouts according to our posted pay-table. Winning hands are as follows:

Things to Remember When Playing Let It Ride

At Island Resort & Casino, we are focused on providing an enjoyable and memorable gaming experience for every visitor. To make your visit as enjoyable as possible, we hope you remember to: 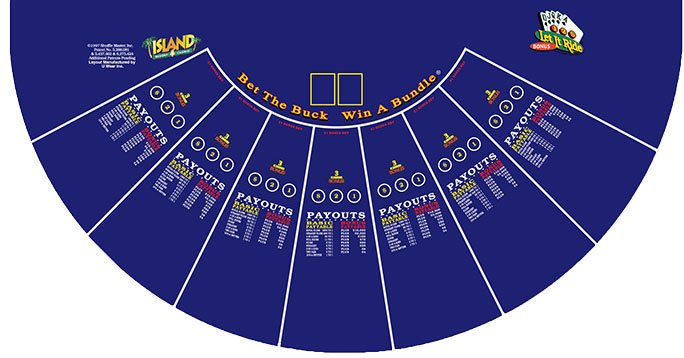